You are here: Home / Storytelling / Countless possibilities start from a cluttered desk 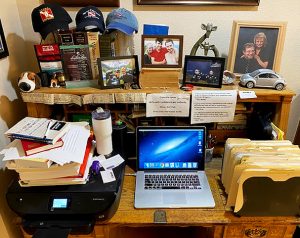 My desk isn’t so much cluttered as it is disastrous. I’m talking well beyond what the British might describe as a dog’s breakfast. Picture instead the aftermath of a tornado that’s ripped through a trailer park.

It’s not like there’s any shortage of storage. That’s no excuse. My rolltop desk features eight drawers and no less than 19 cute little cubbies. But each is crammed full of junk, most of which I haven’t touched since I stuffed it there years ago.

The surface of my desk is no less crowded with not only my laptop computer and printer, but also files, books and paperwork. The crowing touch, so to speak, are the baseball caps I brought back as souvenirs from scuba diving resorts.

I taped quotations and admonitions to a spot at eye level where they serve as ready reminders.

“Where were you last weekend?” one asks.

“I went to a writers retreat,” the other answers.

The next panel shows four writers sprinting away, the pages of what are presumably their works in progress flying behind. One writer screams. “Run. Run. Writing’s too hard.”

In one sense, it’s a shame the bric-a-brac on my desk covers a beautiful 19th century heirloom. The desk belonged to my beloved late wife and before that her father and grandfather. I expect my sons will one day treasure their mom’s desk as much as she did. I’m just borrowing it until then.

I suppose it might be more efficient to maintain a militaristically clean desk. Still, there’s an argument to make for the benefits of a workspace that’s both comfortable and comforting. I’m distracted by the odds and ends that surround me, but also reminded of all the blessings I have to count. And that’s a good place, at least for me, from which to tell stories.

Thankfully, this much is certain: My mind’s not empty.