You are here: Home / Writing / Making the cut sometimes means letting go of your darlings 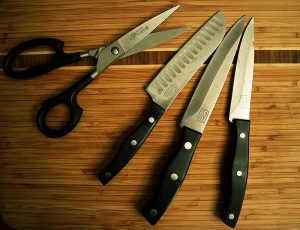 Writers are warned to cut any parts of their stories that don’t push forward the development of their plots or characters.

It’s easy enough to eliminate awkward sentences or scenes that don’t work. It’s a relief, really. It’s less easy, but sometimes no less necessary, to amputate an entire chapter that sticks out like a gangrenous thumb. I’ve got an advantage as a newspaper journalist who’s spent more than 40 years writing “tight” — using words frugally is if there was a possibility I might run out.

But what about the good stuff? The word that’s just right? The well-turned phrase? The perfect metaphor to illustrate the situation? What about the sentence or paragraph or chapter you can’t wait to share with readers?

Get rid of that, too, if doesn’t serve your story. Murder your darlings.

That alarming advice has been attributed over the years to a number of sources. The English writer and literary critic Arthur Quiller-Couch put it this way in a 1914 lecture: “Whenever you feel an impulse to perpetrate a piece of exceptionally fine writing, obey it — wholeheartedly — and delete it before sending your manuscript to press. Murder your darlings.”

Every writer has had to murder their darlings. I’m no exception. I confess. Guilty as charged.

One of my many drafts of “Small Town News” included a prologue — that is, information about something that occurs before the action in the novel begins. Prologues are sometimes useful in telling part of a backstory. But most of the time, prologues aren’t necessary. It’s better to work that information into the main body of the manuscript.

Mark Stevens, an exceptionally gracious and talented author who’s written a series of mysteries set in Colorado, was kind enough to read my first pages. Mark was even more kind to point out my prologue wasn’t necessary. Murder that darling. I did, and the novel is much better as a result.

But here’s one of the advantages of writing blogs: the opportunity to resurrect darlings and share them with readers. So here’s part of that prologue. It’s a scene I enjoyed writing, but ultimately didn’t fit with the rest of the novel.

As always, I’m eager to hear what you think.

A shovel scraped through rocky soil, a grating clang announcing the appearance of yet another stone to pull loose and toss on a growing pile. The man digging and prying and grunting with the exertion continued undeterred. Not yet 28 years old and accustomed to hard work, the man neither rushed to finish nor dawdled to put off the unpleasant task. He proceeded at a steady pace as though he were digging a hole for a fence post rather than hiding the money he’d stolen two days ago.

Oblivious to his friend’s toil, a companion stretched out on the grass and tiny yellow flowers that carpeted the aspen grove surrounding the two men. The charred remains of a campfire smoldered behind a ring of rocks, wisps of white smoke curling through the branches overhead. Sagebrush-covered hills rolled in the distance. Farther still, jagged mountain peaks raked the blue morning sky.

Propped up on one elbow, the companion watched with interest and offered encouragement, but nothing else. “That’s plenty deep,” he said. “Dig any deeper, Butch, and you’re gonna end up in China.”

“Maybe,” the man with the shovel said. “But I’ll take my chances if it’s all the same to you.”

“Ain’t no skin off my nose. But tell me again why you’re burying your money. I’ll hang on to it for you. You can trust me.”

“I do trust you, Harvey,” Butch said. “Nobody I trust more. But like I told you, I want to keep this handy for when I get out. I could be in a hurry, and who knows how long it would take to track down the likes of you. If I change my mind, though, you’ll be the first to know.”

Harvey shook his head. “That’s another thing I don’t understand. Why go to prison? Come with me, and we’ll make a break for it. If we ever run out of all this money, you know as well as I do where we can get more.”

“That’s sorely tempting. But when they cut me loose up in Fremont County, I promised I’d come back. And I’m nothing if not a man of my word.”

Finally satisfied with his work, Butch stopped digging and thrust the shovel into a mound of dirt beside the hole. He pulled off worn leather gloves and mopped the sweat off his forehead with a shirt sleeve. A refreshing breeze rustled the leaves, but he could feel the heat of the summer day coming on. He was grateful the most arduous portion of his task was complete.

“Make yourself useful and hand me that,” Butch said, pointing to a pot beside the campfire.

“This?” Harvey asked as he stood up. He grabbed a cast iron pot by the thick wire bale. The pot had been rinsed with water from the nearby river, but still smelled like last night’s dinner — a stew of potatoes, onions and stringy meat off a rabbit whose feet, as it turned out, weren’t lucky at all.

Harvey protested as he handed the pot to Butch. “You bury this and we won’t have anything to cook with.”

“We’ll make do,” Butch said as he removed the lid. Loosening the buckles on a bag he’d kept close by, Butch reached in and pulled out two thick bundles of money and threw them in the pot. Heavy fistfuls of coins followed, the metal glittering in the sunlight filtering through the trees. Almost as an afterthought, Butch removed a thick envelope that had been folded in half. He could hear the coins inside jingle as he tossed the envelope into the pot. He replaced the lid, lowered the pot into the hole and quickly refilled the hole with the rocks and soil he’d just worked so hard to extract.

Harvey whistled in admiration. “No doubt about it, Butch. That’s a fine place to hide your loot. But how do you figure on ever finding it again?”

“Just watch,” Butch said as he pulled from the bag four horseshoes and a handful of nails. Walking to a large aspen, he reached as high as he could. Using the flat back of a hatchet like a hammer, he nailed a horseshoe to the thick white trunk. He repeated the process three times.

It was then Harvey realized Butch had buried his treasure dead center between four trees adorned with horseshoes.

The resulting X really did mark the spot.